A new kitchen for an original Daylesford home. 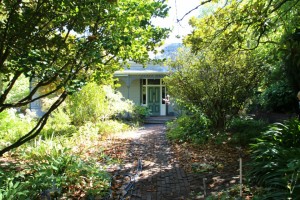 Originally called Wombat, Daylesford became an official municipality in 1859. Its beginnings in 1851 began with the discovery of gold where Lake Daylesford is now. The town grew and many large mines were established in the area.  In 1860 Town planners set aside 10 acres on Wombat Hill and the Botanic Gardens sprang to life in 1863. The Botanic Gardens can be accessed from one of the original town streets, Central Springs Road, where this original house is situated.

The house began as a one roomed brick cottage. The home still contains this structure which was built in 1852 by James McMillan. It is one of the oldest occupied sites in Daylesford. James ran the Ironmongers store from 1852-1903. Another long term owner of the home was William Weir who owned and operated the local movie theater from 1914. He was a Councillor and Mayor 1924-1925. The Weir family  occupied the house for 50 years. It was purchased by the current owner in 1984. 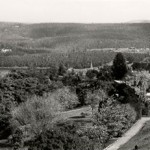 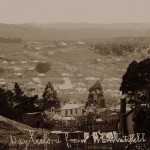 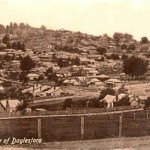 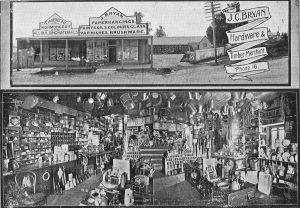 I believe this is the original Ironmongers store, see for your self , it looks just like the current Home and Hardware Store in Daylesford. The current owners claim that the store has been locally owned and operated for over 150 years. Could this be the store that James McMillan built and ran whilst living in this house? 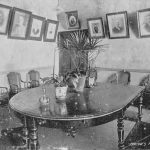 The Mayors Room in the Town Hall 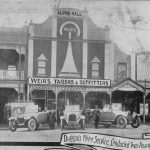 Another venture for the Weir Family in Daylesford

I wonder if there is a picture of William Weir hung on the walls in this picture of the Mayor’s room. He owned and operated the first silent movie theater in Daylesford in 1914, in the Alpha Hall Galleria. Weir’s Tailors & Outfitters occupied the street level with the theater above.  Its demise was inevitable when the Rex opened a few doors down in 1929 and then began showing films with sound in 1930. The building can still be found on Daylesford’s main street. It now houses the Clay Fire Gallery below and the Dress Circle of the theater has been converted into accommodation.

A new Kitchen for an original Daylesford Home. 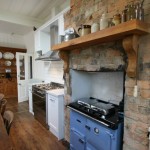 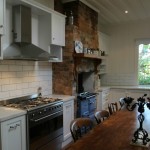 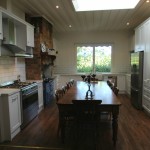 Table in the centre of the kitchen 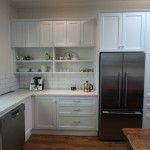 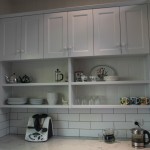 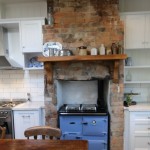 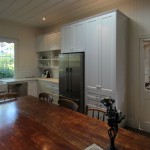 Tall Pantry with drawers and doors.

This Modern Country White Kitchen compliments its old 1800’s surroundings but has all of the mod-cons of the 21st century.

We manufactured the shaker door in our factory at Matthews Joinery and Kitchen Centre. It was painted with a 2Pac Satin finish in Dulux Lexicon Half B6.

The benchtop is 40mm Athena from Smartstone. This marble look has been very popular in country kitchens, although it does tend to be more expensive in most stone ranges the Smartstone range is well priced. 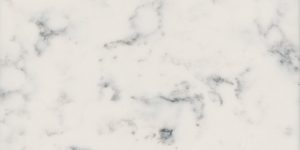 The splashback has been tiled with a traditional brick pattern in a white tile.

Matthews Joinery and Kitchen Centre supplied the sink and tap from our Furnware Dorset range of traditional Butlers sinks and Traditional Style taps. We utilsed the cabinet under the sink for a clever spot to place the bins. This is often a hard to reach spot but this pull out bin system fits into a drawer and makes accessing the bins easy.

BLUM Softclose drawers were used throughout the kitchen. The new Antaro range has weight loadings upto 60kg per drawer, fully extended! That’s a lot of plates! We also used some of the clever storage options that BLUM have in their range such as the Bottle Set and cutlery and utensil storage systems.

The corners were utilsed and made accessible with the clever wire pull out units from Titus Tekform.

Contact us on 03 5334 3466 to make a time to see our designer or drop in if your driving past our showroom at 130 Learmonth St, Alfredton

Browse our ideas gallery to inspire the creation of your new kitchen, bathroom, study, laundry or commercial project.
More ideas

Watch us demonstrate some of our hardware.
Watch Video