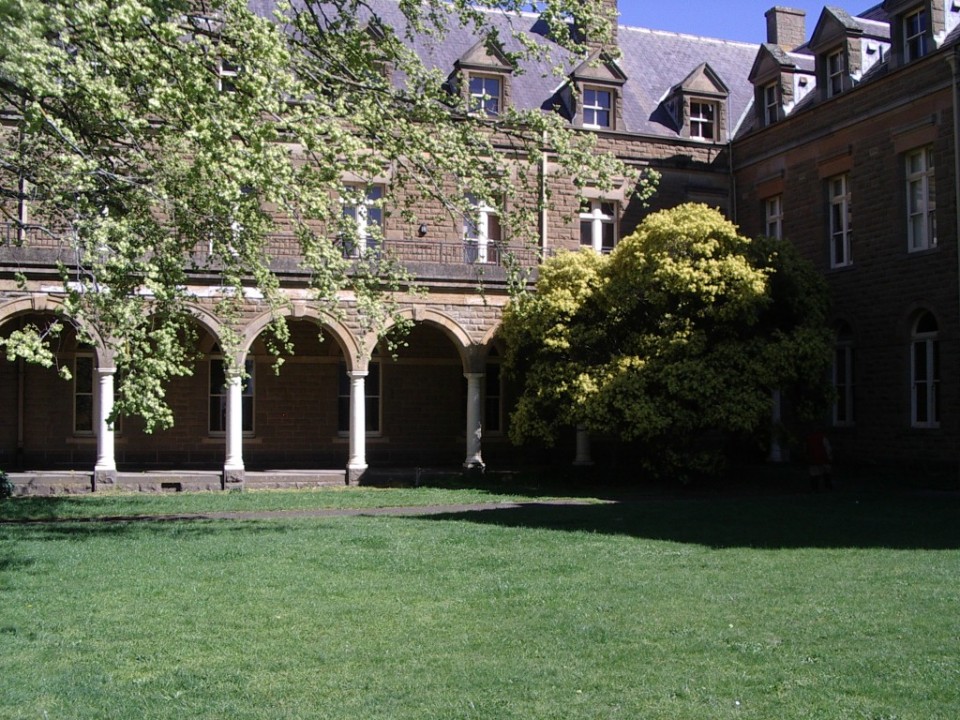 The construction of this beautiful Monastery began in 1891 and was completed in 1893. It was designed by Architects Reed, Smart & Tapin. The church was added to the building in 1915. It served as a base for an order of priests and brothers from the Catholic church in the Western District . At its peak in the 1960’s there were around 1000 priests and brothers living and working in Ballarat. The building was sold by the church in the late 1990’s and purchased by several developers. The site lay empty and became run down as the developers tried to get their plans through council. The building and grounds have significant heritage overlays that needed to be considered. 1999 brought us the first development with the construction of the Harvey Norman store on the corner of the grounds. Plans for the Monastery development to convert the building into 28 apartments were finally approved and they were completed in 2002. Back Door to our Joinery Challenge

This large and solid door leads from the cloistered walkway into our joinery challenge. As you can see the walls are solid stone and very thick. Inside the building it stays a fairly constant 19*C. Our client’s apartment was originally the rerefectory / dining room for the Monastery, hence the decorative floors and ceilings. 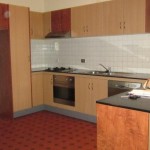 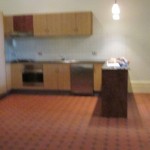 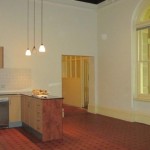 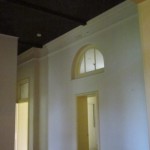 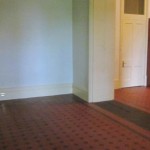 This is a Gothic Tile tessellation with heritage overlay

*DESIGN JOINERY THAT ACCOMMODATES CLIENT’S HEIGHTS, ONE BEING SHORT AND ONE BEING TALL

*DESIGN JOINERY THAT DOES NOT IMPACT ON THE HERITAGE TILES

*INCORPORATE  LIGHTING INTO THE JOINERY

Working closely with our client’s we began to develop some joinery solutions. Not being able to touch the floor created issues when we looked at getting power to the island joinery. Putting all of the appliances and sink along the one wall didn’t leave any bench space and didn’t address the need for variable bench heights. We needed to have a lower cooking and prep area and a higher sink and cleaning area. 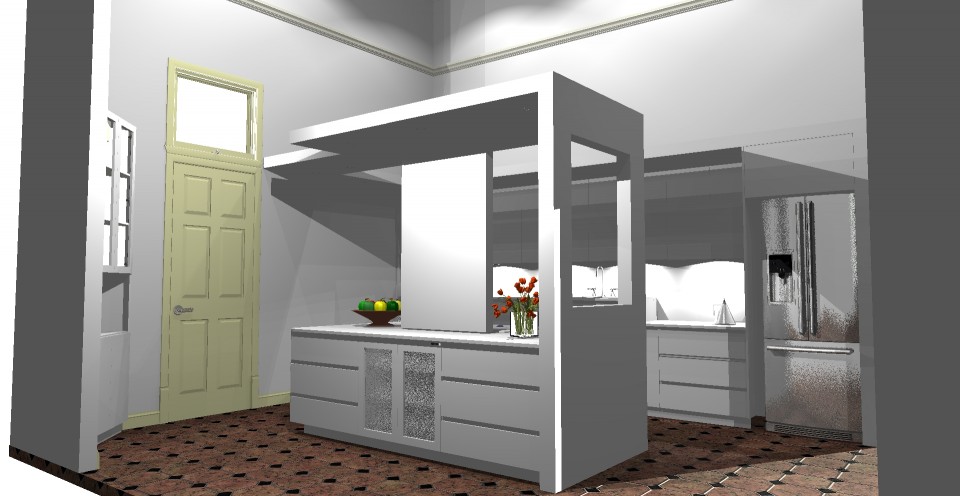 3D renderings and comprehensive plans were discussed with our clients. In the final joinery solution we created an overhead panel to deliver light and power to the island joinery. The panel was constructed to look like a wall and continued throughout the design. Where the wall returns to the floor on the right side of the island joinery a cut out was created to lighten the look and allow the person cooking to see the dining table and out of the window.

The kitchen joinery has a handless look. We used a Solu extrusion in a natural annodised finish. The joinery doors and panels were fabricated from a high gloss board from Polytec in Ultra white. The bench tops are ESSA Stone Bone white 20mm thick. All of the drawers have Blum Tandembox softclose full extension runners with weight loadings of 30kg and 50kg. LED lights were used in the joinery to keep energy costs down. 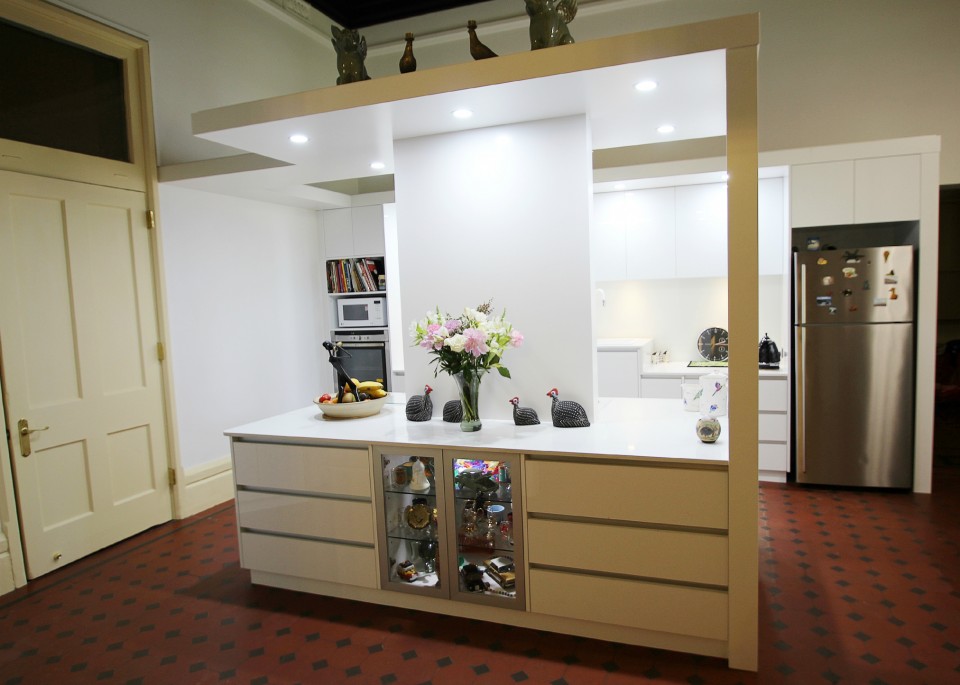 Many storage ideas were incorporated into the joinery, creating a space for everything. The addition of the display cabinet to the Island joinery created the space needed to display the client’s travel memorabilia. We used glass shelves and LED lighting to showcase the cabinet. A 25mm metal frame was used for the doors with clear glass. 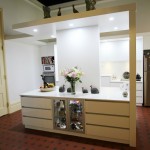 Juxtaposition of New in Old 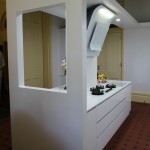 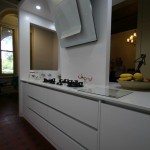 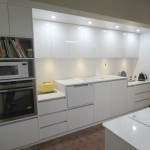 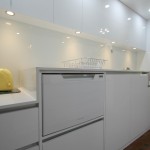 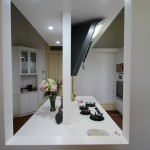 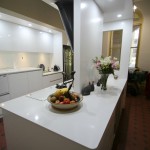 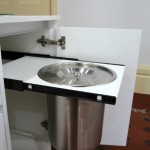 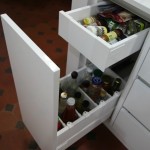 Bottle and spice storage to Island 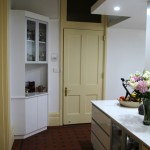 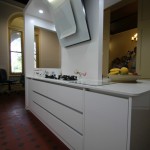 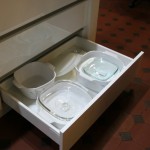 A place for everything 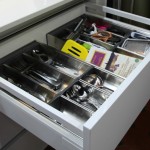 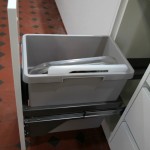 In summary, it was a delight to work in a building that has so much history. It was very rewarding to arrive at a design solution that fulfilled so many of our client’s needs. With the vast skills and knowledge of Rod and Andrew we were able to make it happen. The apartment has a lovely feel and now is also very functional. The light that the working areas now have is fantastic. Installation was executed by Dennis Moll who had been doing many renovations in the apartment. Dennis sub-contracts to Matthews Joinery.

This project shows that working with a qualified designer and a skilled team of joiners you can achieve great results that do go outside of the box.

I look forward to the next challenge, projects like this keep things interesting!

Browse our ideas gallery to inspire the creation of your new kitchen, bathroom, study, laundry or commercial project.
More ideas

Watch us demonstrate some of our hardware.
Watch Video